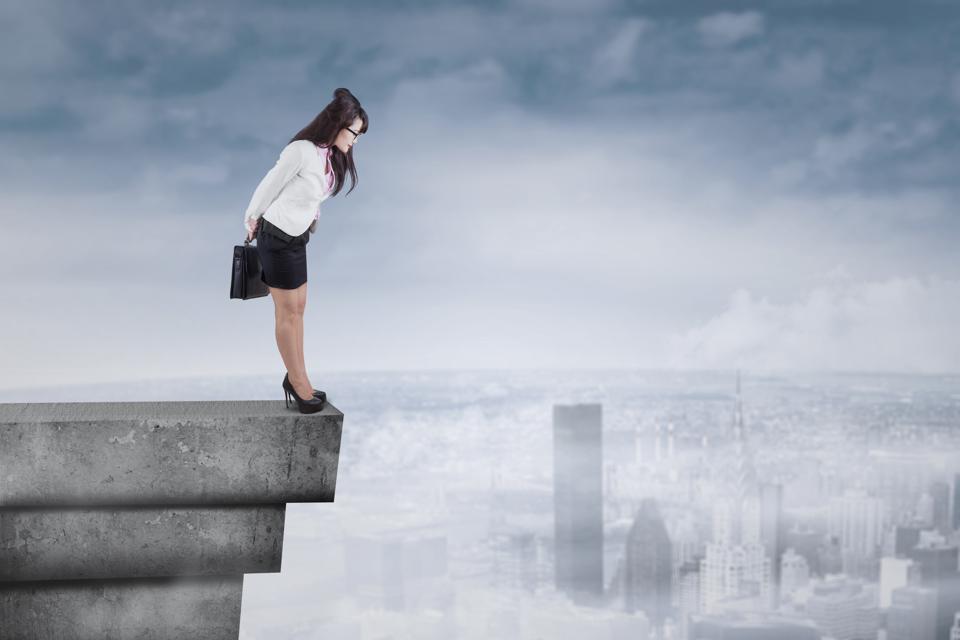 To review, the glass ceiling generally refers to the phenomenon of an invisible barrier through which women can visualize senior leadership positions in the organization, but cannot achieve them no matter their particular qualifications and accomplishments.

The glass cliff, on the other hand, refers to the phenomenon by which women are more likely to be appointed to senior executive positions during times of organizational crisis, making them less likely to succeed. These newly appointed executives may confront internal board resistance, operate with less time flexibility, and ultimately receive shorter tenure than their male counterparts. And, when a woman CEO is terminated from her position, she is more likely than not to be replaced by a male (the “savior effect”).

Issues associated with the glass cliff received public attention recently with media coverage of Jane Fraser’s ascendancy as CEO of Citigroup. The New York Times DealBook feature referred to the Citigroup position as “a big repair job, a major turnaround effort” and speculated whether her hiring would contribute to the perception “that women are more likely than men to be given tough cleanup jobs when promoted to top roles, setting them up for failure.” Ms. Fraser firmly denied any glass cliff concerns, noting that while she may have a different style, it is not gender related.

The potential presence of a glass cliff-based employment or advancement challenge should be of front-burner concern to corporate boards. McKinsey/LeanIn.org’s most recent “Women in the Workforce” survey highlights this risk. It describes the continuing under-representation of women and women of color in senior management, which “cannot be explained by attrition alone.” It further describes as an “emergency for corporate America” the risk that women (especially senior-level women) are increasingly more likely post-pandemic to leave the workforce.

It is in this context that glass cliff scenarios are of particular importance to the board and its oversight of workforce culture. Executive talent is a particularly critical corporate asset for which the board has a unique fiduciary responsibility to recruit, develop and maintain. As with all matters of gender equality, any perception of a glass cliff within the internal workforce, or externally amongst the pool of women executive candidates, could be damaging to the company, its workforce culture and its reputation.

Thanks in part to the McKinsey/LeanIn and other similar surveys, many boards are working diligently to address COVID-19 and other gender-based inequities in workforce culture. They are confronting “broken rung” issues with respect to internal advancement, and adjusting workforce conditions to make them more responsive to gender-based concerns.

It would be a logical and timely extension of these initiatives for the board and its key committees to formally confront glass cliff concerns as well. Such efforts could include: (i) leadership-level education (emphasizing the distinction with the glass ceiling); (ii) greater commitment of organizational support to women senior executives assuming positions in times of crisis; and (iii) enhanced sensitivity at the executive succession committee to the “savior effect,” and to gender as a consideration in executive level hiring under all operational circumstances.

Academic research suggests that a company’s leadership history and common assumptions about gender and leadership actually contribute to glass cliff circumstances. Given that, perhaps the board’s greatest contribution to eliminating glass cliff concerns could be tone-at-the top-related; i.e., clear messaging from corporate leadership on the need to end gender-based stereotypes about women in executive positions.

Responsible governance is fully engaged in addressing the pressing cultural issues of the day, such as workforce environment; gender equity; diversity in leadership and the workforce; matters of social justice and corporate citizenship; workplace safety; the interests of underrepresented constituencies and other similar aspects of social responsibility. No matter the packed nature of the board agenda, there should be room for glass cliff considerations as well.

Yet some boards might be reluctant to do so; concerned that the totality of time spent on social responsibility concerns might distract the board from critical operational concerns or delayed decisions on important business opportunities. That adding glass cliff to a board or committee agenda might be the proverbial straw that breaks the camel’s back in terms of governance capacity.

But inbred stereotypes of gender roles can take a long time to overcome; time that most corporations don’t have. The succession planning that is such a critical fiduciary obligation must be gender-blind. The model of identifying talent early and providing opportunity for that talent to develop must be applied consistently with both male and female talent. Appropriate reorientation about the role of women in the workplace can’t wait for an open spot on the board or committee agenda.

Great progress has been made in terms of the number CEO positions held by women, particularly amongst the Fortune 500. Companies simply cannot jeopardize that progress, or undermine the capabilities of their own women executives, by allowing certain stereotypes about women CEOs to perpetuate. Boards should aggressively team with management to ensure gender equality across the internal playing field. It’s the smart ethics play, and it’s also the smart business play.