Despite pledges to nominate more members of underrepresented ethnic and racial groups, companies have made little progress over the last five years. 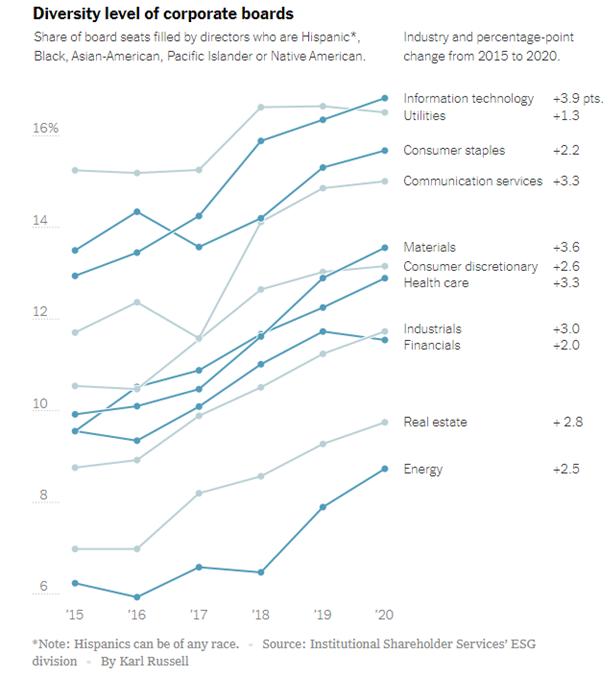 Corporations in the United States have pledged for years to increase the number of Hispanic, Black, Asian-American and other underrepresented members on their boards, which make decisions that affect the livelihoods of millions. Yet a comprehensive new survey finds that they have made little progress.

The boards of the 3,000 largest publicly traded companies remain overwhelmingly white. Underrepresented ethnic and racial groups make up 40 percent of the U.S. population but just 12.5 percent of board directors, up from 10 percent in 2015, according to a new analysis by the Institutional Shareholder Services’ ESG division. The firm, which announced a database of the findings on Tuesday, advises investors on how to vote in board elections and on other corporate matters.

Since the death of George Floyd in police custody in May, many chief executives have backed efforts to tackle racial injustice. In theory, the one thing that they could swiftly change is the corporate boardroom. Executives and their boards wield tremendous clout in selecting new directors, and their picks are almost always approved by shareholders.

A group of 44 executives and organizations last week announced the Board Challenge, a campaign that calls on companies to add a Black director within the next 12 months. One of the supporters of that effort is Tony West, the chief legal officer for Uber and a former senior Justice Department official in the Obama administration.

“The real test will not be in the commitments that we’re making right now in this moment of heat,” Mr. West said, “but what the commitment will be over the long term when the protesters have gone home.”

Board members have a lot of power because they are ultimately responsible for directing companies. A board approves a company’s strategy and most important goals, hires the chief executive and determines how much it will pay senior executives. A special board committee nominates new members and, as a result, has the power to make boards more diverse by seeking out candidates who are not white men.

A lot of power also rests with the big investment houses that vote in board elections through the shares they own and manage. Some, like Larry Fink, the chairman and chief executive of BlackRock, the world’s largest investment manager, have spoken about “the critical importance of diversity and inclusion.”

Lawmakers could also act. The California Legislature recently passed a bill that would require companies with headquarters in the state to have at least one board member from an underrepresented ethnic group, or who identifies as gay, bisexual or transgender, by the end of 2021. A spokesman for Gov. Gavin Newsom declined to say if he intends to sign the bill. (The measure is modeled on a 2018 California law that requires companies to appoint at least one woman to their boards.)

Pedro J. Pizarro, chief executive of Edison International, a large electric utility in California, said the reaction to the killing of Mr. Floyd seemed to have led to more serious conversations about racism within companies. “In my 55 years of being around, this is a very different feel to the discussion — and that’s encouraging,” he said.

Mr. Pizarro and Mr. West said having a diverse group of corporate leaders was not just the right thing but also good for the health of businesses. Some studies have found a link between diversity and corporate profits, for example.

Mr. West, who advises Uber’s board but is not a director, said having people from underrepresented ethnic and racial groups on boards helped executives better understand how to win the business and loyalty of customers.

“You can’t compete and win and design technology that’s innovative and inclusive if you don’t have those kinds of perspectives informing the entire process,” he said.

Mr. Pizarro said input from such directors and leaders helped his company secure approval from state regulators for a $436 million investment in electric vehicle charging in California that involved understanding the needs of lower-income communities.

Socially conscious shareholders have pushed for changes in the boardroom in recent years but may have lacked exhaustive data on race and ethnicity. Brett Miller, head of data solutions for the responsible-investment arm of Institutional Shareholder Services, said his firm’s clients had been eager for more information on board diversity.

“With this data, you have information to find companies who can do better, and then engage with them, and measure progress,” he said.

At the end of 2015, individuals from underrepresented ethnic and racial groups filled more than 10 percent of board seats in only five of 11 industry categories. Now, they do so in nine industries. The two laggards are the energy sector, where 9 percent of board directors are Hispanic, Black, Asian-American or from another minority group, and real estate, where the total is 10 percent.

But no industry gets close to 20 percent. Technology companies, at 17 percent, have the highest share, followed by utilities, at 16.5 percent.

Women have made much bigger advances. They now make up 21 percent of directors, up from 13 percent in 2015. But, clearly, they remain far below parity with men.

One of the other big revelations from the survey is that companies are struggling to expand the recruiting pool. Individuals from underrepresented groups are more likely to sit on more than one board. The survey shows that nearly 28 percent of Black and Hispanic directors sit on at least two boards, compared with 19 percent of white directors.

Bristol Myers Squibb, for example, recently elected two new Black directors, Paula A. Price, who sits on the boards of three other public companies, and Derica W. Rice, who is on two others, including Target’s board, which he rejoined in August.

Ms. Price and Mr. Rice declined to comment. A Bristol Myers representative said its directors were “selected for their skills and experience to provide oversight over our business operations, long-term strategy and other priorities,” adding that the company was “committed to diversity and inclusion.”

A Target representative said the retailer “looks for board members that can bring a diverse perspective along with a range of leadership experiences appropriate for the board of a company Target’s size and scale.”

Mr. Pizarro said he’s had to push to get woman and people from underrepresented ethnic groups onto lists of potential board candidates. “Frankly, we have to work sometimes hard with the recruiters that we use,” he said.

Sukhinder Singh Cassidy founded theBoardlist, a company that connects executives with companies looking for board members, to respond to the idea that there was a lack of suitable women, Black, Hispanic and other candidates — something often referred to as the “pipeline problem.” She said companies would find more qualified candidates when chief executives widened the scope of their searches and set stricter term limits for directors.

Institutional Shareholder Services gathered data for its analysis from company filings, other public information and responses to questionnaires sent to the companies.

The firm also found that directors from underrepresented groups were much less likely to have positions with the most influence over the direction of companies and their boards. Nine out of 10 people in those positions — the board chair, the head of the committee that recruits top executives and new board members, and the head of the committee that sets compensation for senior executives — are white.

“The data show that even as companies make some progress adding diverse directors to their boards the key strategic positions are still overwhelmingly controlled by white directors,” Mr. Miller said. “This may be one of the reasons progress has been slower than some have hoped for.”