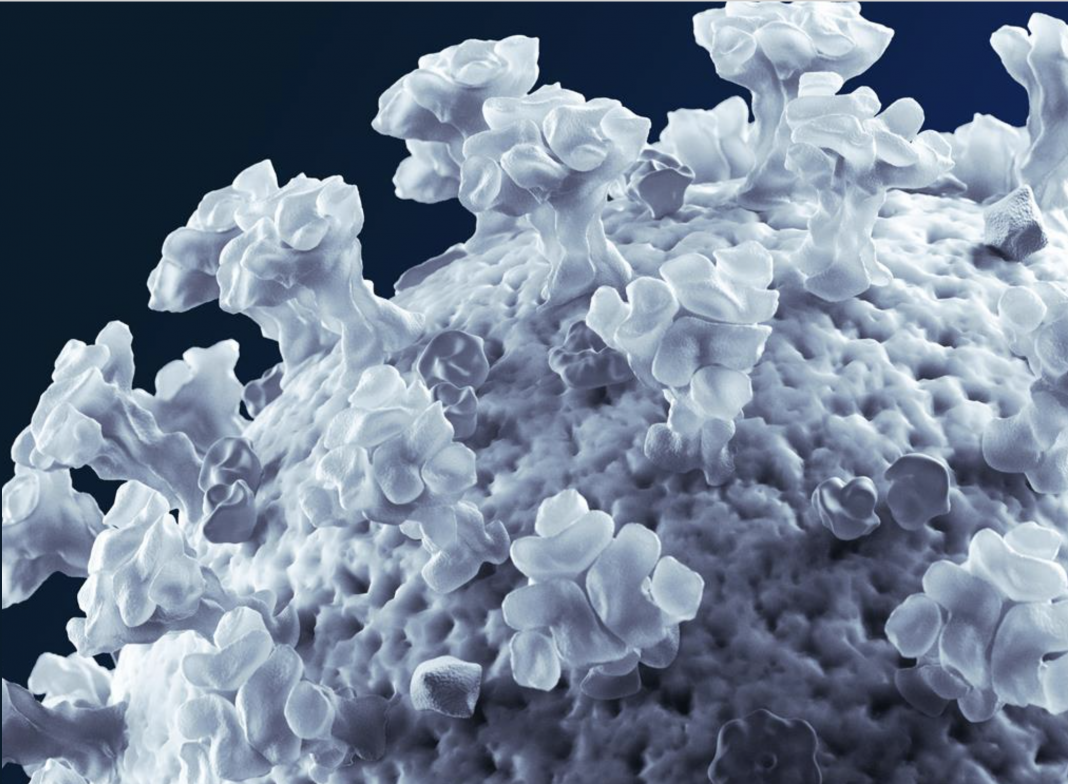 The coronavirus outbreak is first and foremost a human tragedy, affecting hundreds of thousands of people. It is also having a growing impact on the global economy. This article is intended to provide business leaders with a perspective on the evolving situation and implications for their companies. The outbreak is moving quickly, and some of the perspectives in this article may fall rapidly out of date. This article reflects our perspective as of March 16, 2020. We will update it regularly as the outbreak evolves.

Current perspectives on the coronavirus outbreak

At the time of writing, there have been more than 160,000 confirmed cases of COVID-19 and more than 6,000 deaths from the disease. Older people, especially, are at risk (Exhibit 1). More than 140 countries and territories have reported cases; more than 80 have confirmed local transmission. Even as the number of new cases in China is falling (to less than 20, on some days), it is increasing exponentially in Italy (doubling approximately every four days). China’s share of new cases has dropped from more than 90 percent a month ago to less than 1 percent today. 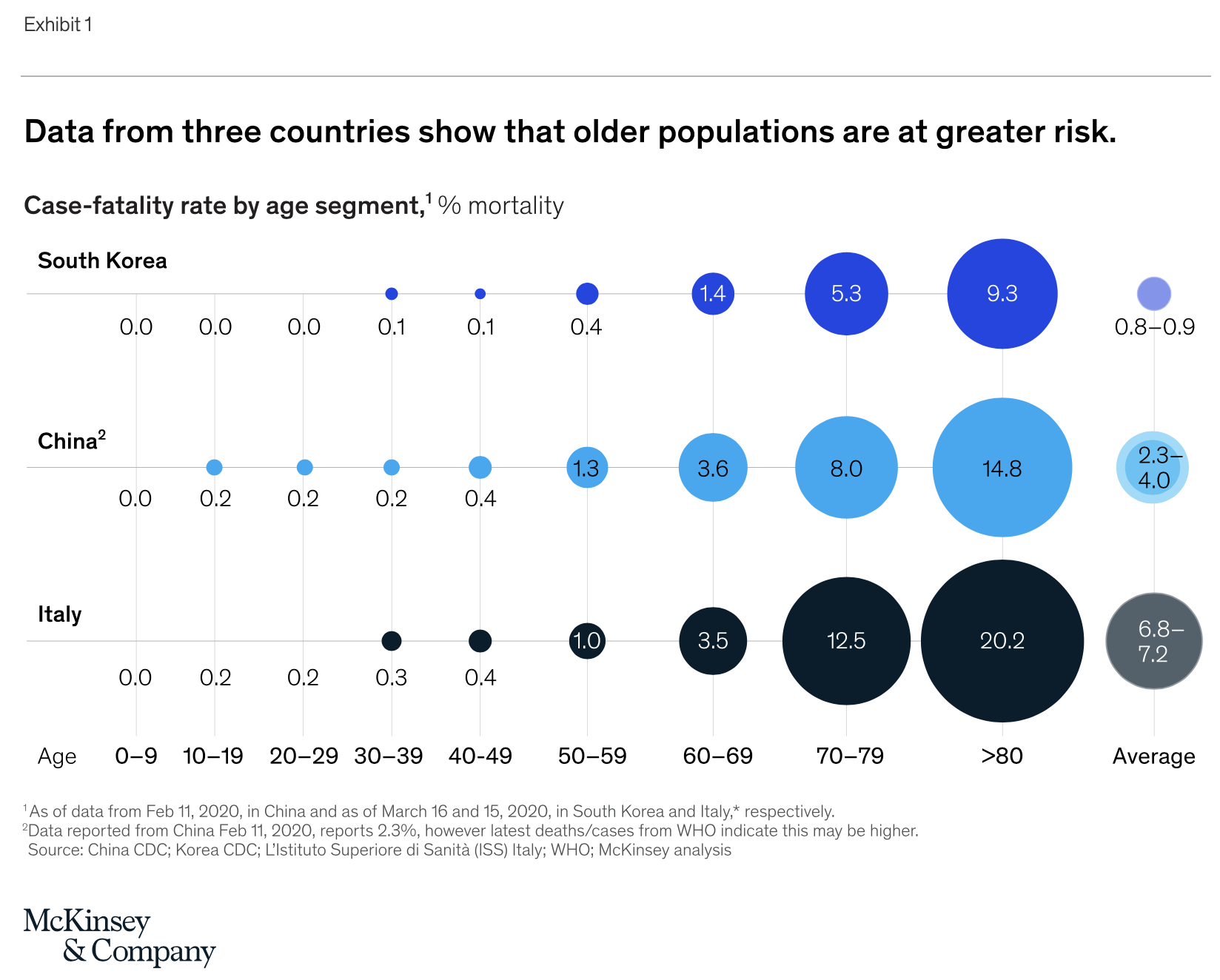 WHO declared COVID-19 a pandemic on March 11, 2020. In its message, it balanced the certainty that the coronavirus (SARS-CoV-2) will inevitably spread to all parts of the world, with the observation that governments, businesses, and individuals still have substantial ability to change the disease’s trajectory. In this note, we describe emerging archetypes of epidemic progressions; outline two scenarios for the pandemic and its economic effects; and observe some of the ways that business can improve on its early responses.

Our perspective is based on our analysis of past emergencies and our industry expertise. It is only one view, however. Others could review the same facts and emerge with a different view. Our scenarios should be considered only as two among many possibilities. This perspective is current as of March 16, 2020. We will update it regularly as the outbreak evolves.

Many countries now face the need to bring widespread community transmission of coronavirus under control. While every country’s response is unique, there are three archetypes emerging—two successful and one not—that offer valuable lessons. We present these archetypes while acknowledging that there is much still to be learned about local transmission dynamics and that other outcomes are possible: 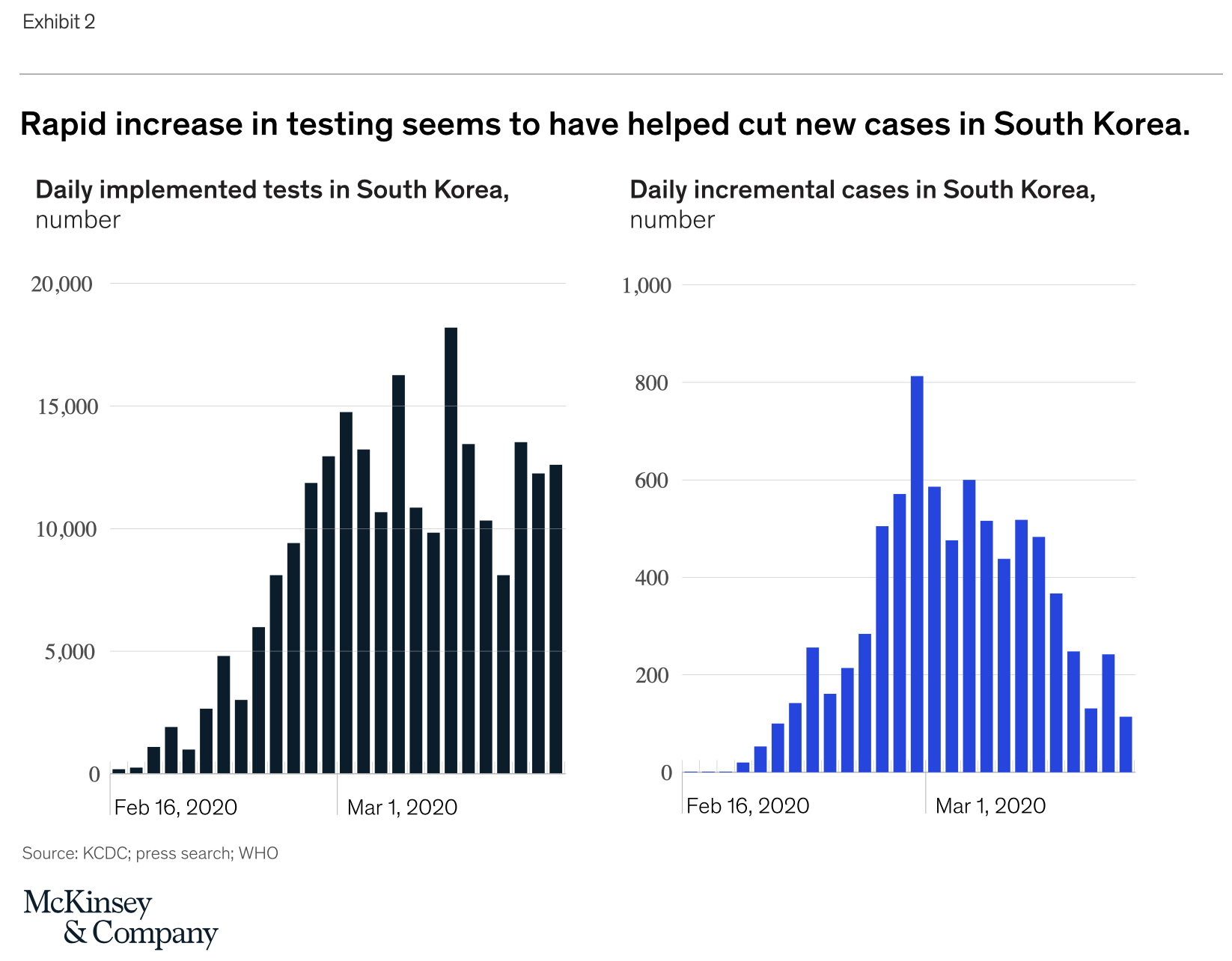 There are also other approaches being considered (such as a focus on reaching herd immunity); the impact of these is unclear.

Based on new information that emerged last week, we have significantly updated and simplified our earlier scenarios. A number of respected institutions are now projecting very high case counts. The most pessimistic projections typically give the virus full credit for exponential growth but assume that humans will not respond effectively—that is, they assume that many countries will fall into the third archetype described earlier. We believe this is possible but by no means certain. The scenarios below outline two ways that the interplay between the virus and society’s response might unfold and the implications on the economy in each case. Exhibit 3 lays out a number of critical indicators that may provide early notice of which scenario is unfolding. 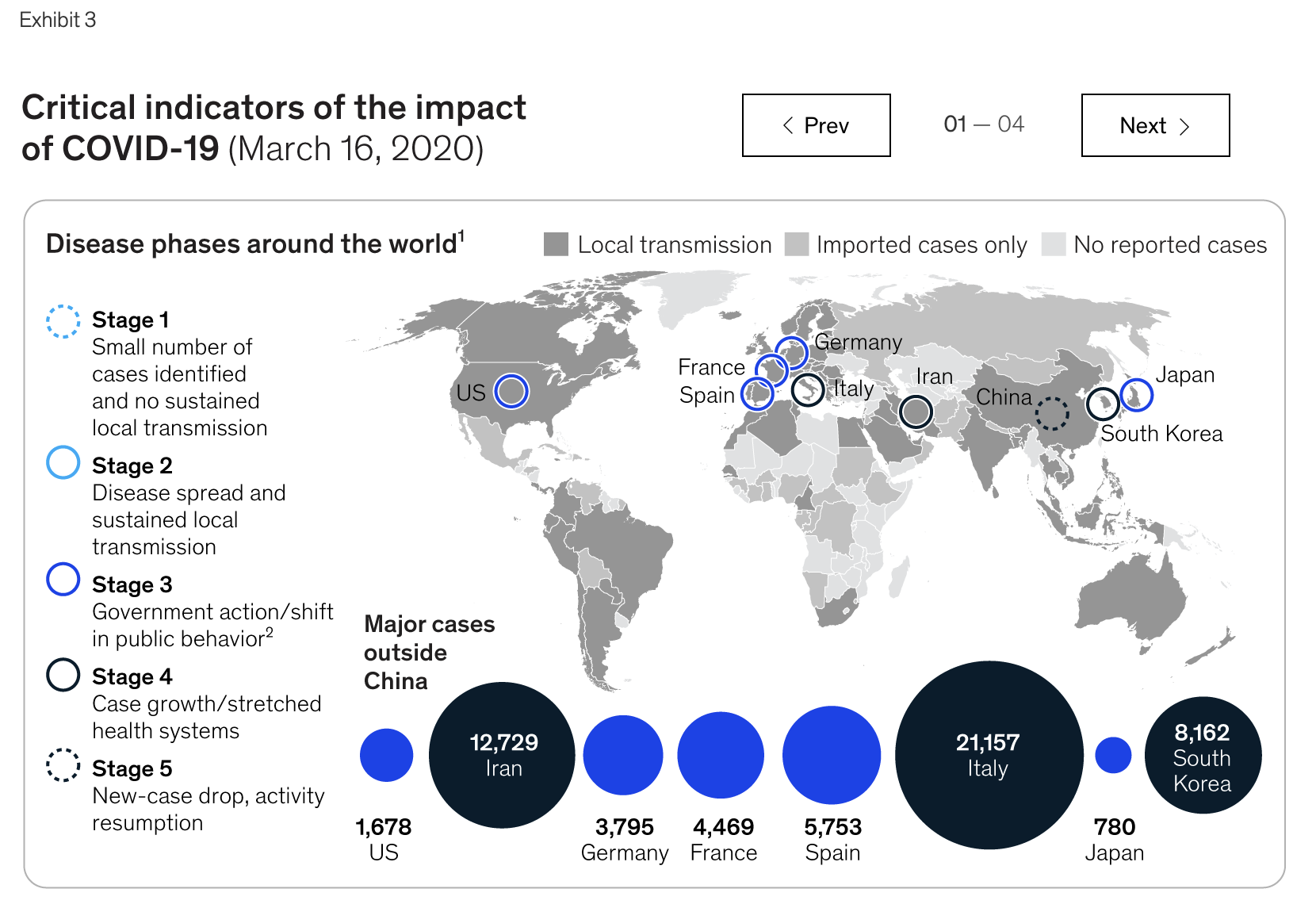 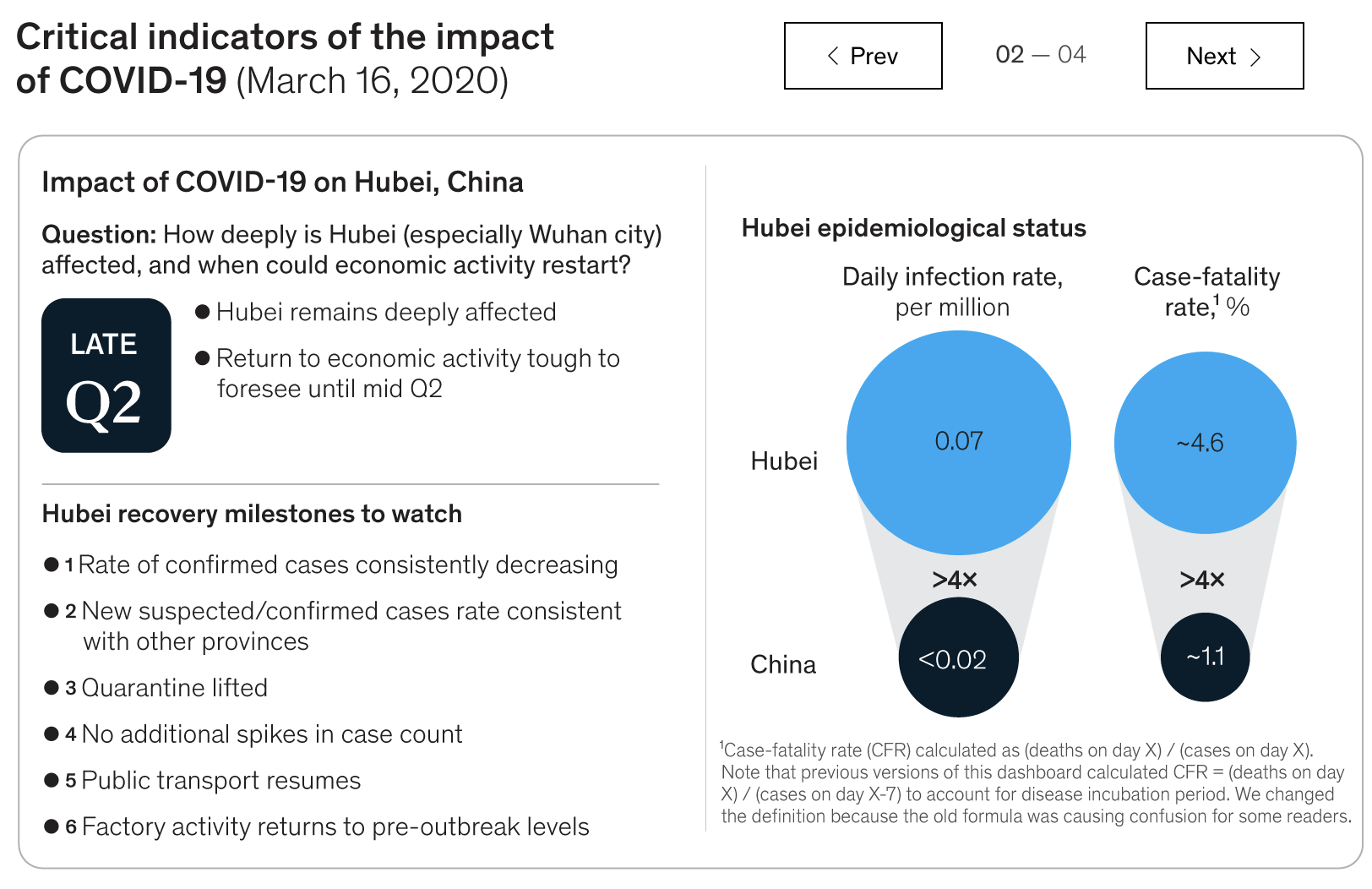 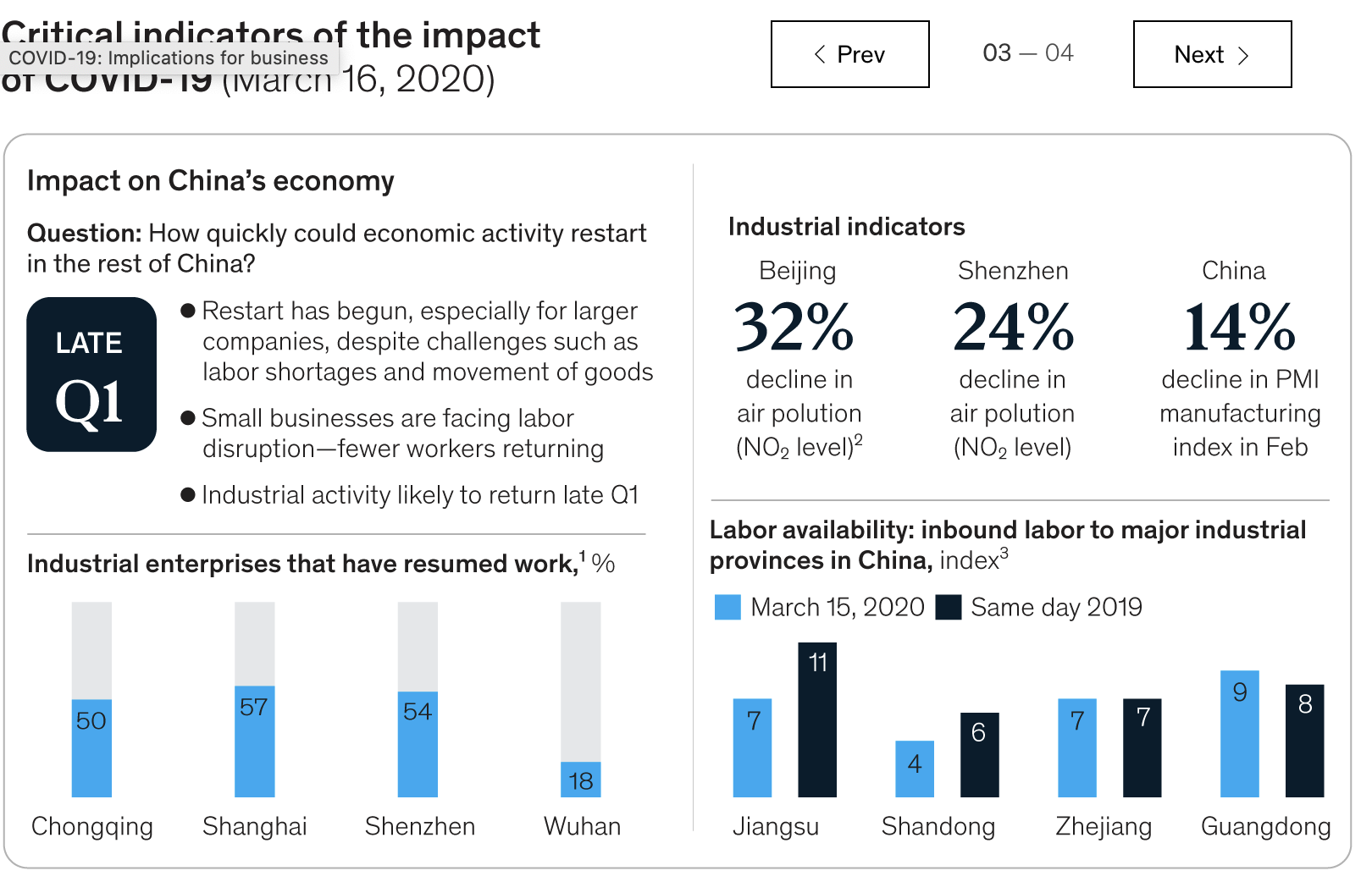 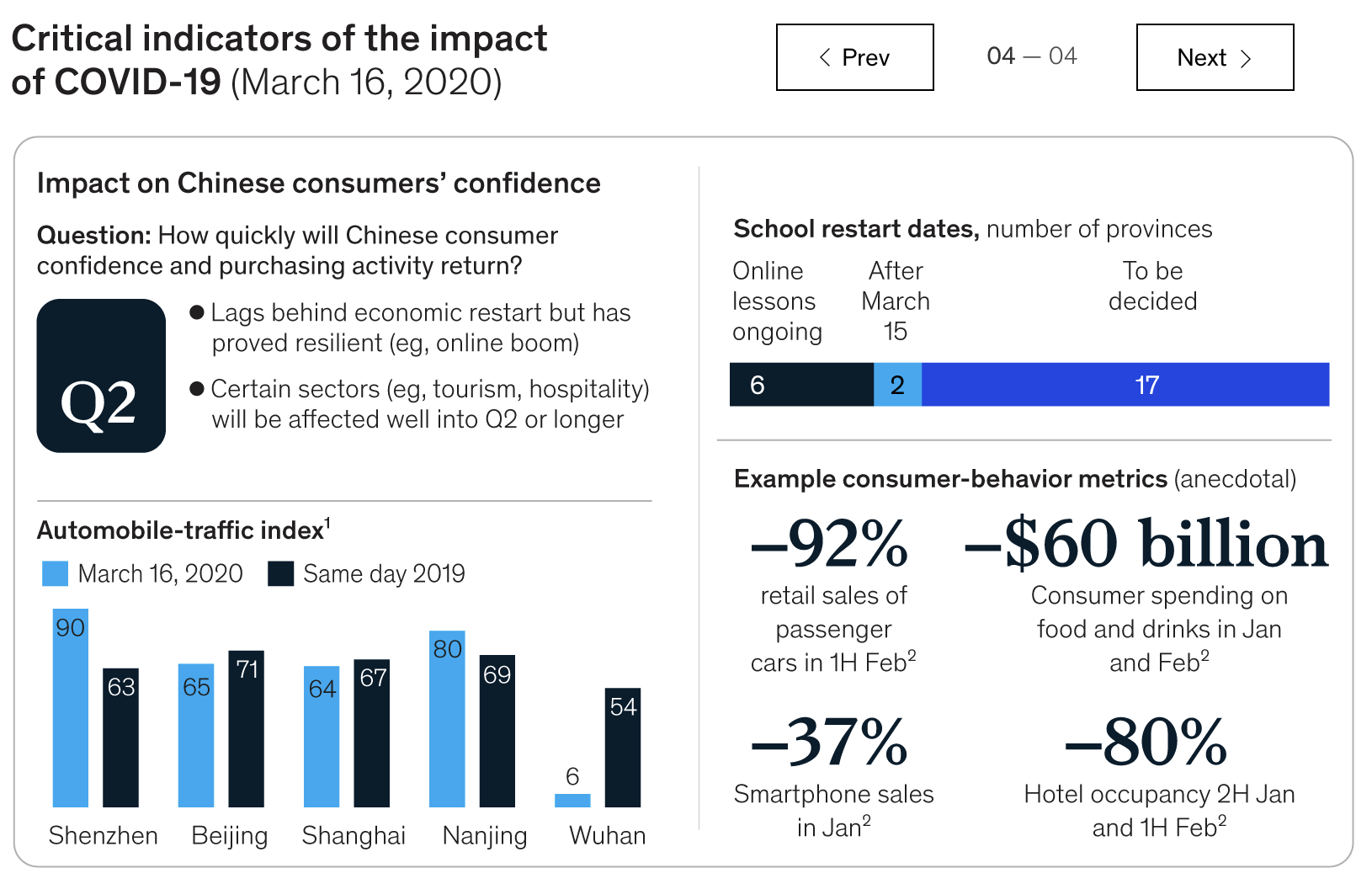 Epidemiology. In this scenario, new case counts in the Americas and Europe rise until mid-April. Asian countries peak earlier; epidemics in Africa and Oceania are limited. Growth in case counts is slowed by effective social distancing through a combination of national and local quarantines, employers choosing to restrict travel and implement work-from-home policies, and individual choices. Testing capacity catches up to need, allowing an accurate picture of the epidemic. The virus proves to be seasonal, further limiting its spread. By mid-May, public sentiment is significantly more optimistic about the epidemic. The Southern Hemisphere winter sees an uptick in cases, but by that point, countries have a better-developed playbook for response. While the autumn of 2020 sees a resurgence of infections, better preparedness enables continued economic activity.

Economic impact. Large-scale quarantines, travel restrictions, and social-distancing measures drive a sharp fall in consumer and business spending until the end of Q2, producing a recession. Although the outbreak comes under control in most parts of the world by late in Q2, the self-reinforcing dynamics of a recession kick in and prolong the slump until the end of Q3. Consumers stay home, businesses lose revenue and lay off workers, and unemployment levels rise sharply. Business investment contracts, and corporate bankruptcies soar, putting significant pressure on the banking and financial system.

Monetary policy is further eased in Q1 but has limited impact, given the prevailing low interest rates. Modest fiscal responses prove insufficient to overcome economic damage in Q2 and Q3. It takes until Q4 for European and US economies to see a genuine recovery. Global GDP in 2020 falls slightly.

Epidemiology. In this scenario, the epidemic does not peak in the Americas and Europe until May, as delayed testing and weak adoption of social distancing stymie the public-health response. The virus does not prove to be seasonal, leading to a long tail of cases through the rest of the year. Africa, Oceania, and some Asian countries also experience widespread epidemics, though countries with younger populations experience fewer deaths in percentage terms. Even countries that have been successful in controlling the epidemic (such as China) are forced to keep some public-health measures in place to prevent resurgence.

Economic impact. Demand suffers as consumers cut spending throughout the year. In the most affected sectors, the number of corporate layoffs and bankruptcies rises throughout 2020, feeding a self-reinforcing downward spiral.

The financial system suffers significant distress, but a full-scale banking crisis is averted because of banks’ strong capitalization and the macroprudential supervision now in place. Fiscal and monetary-policy responses prove insufficient to break the downward spiral.

The global economic impact is severe, approaching the global financial crisis of 2008–09. GDP contracts significantly in most major economies in 2020, and recovery begins only in Q2 2021.

Responding to COVID-19: What companies are missing

Our conversations with hundreds of companies around the world on COVID-19 challenges have allowed us to compile a view of the major work streams that companies are pursuing (Exhibit 4). 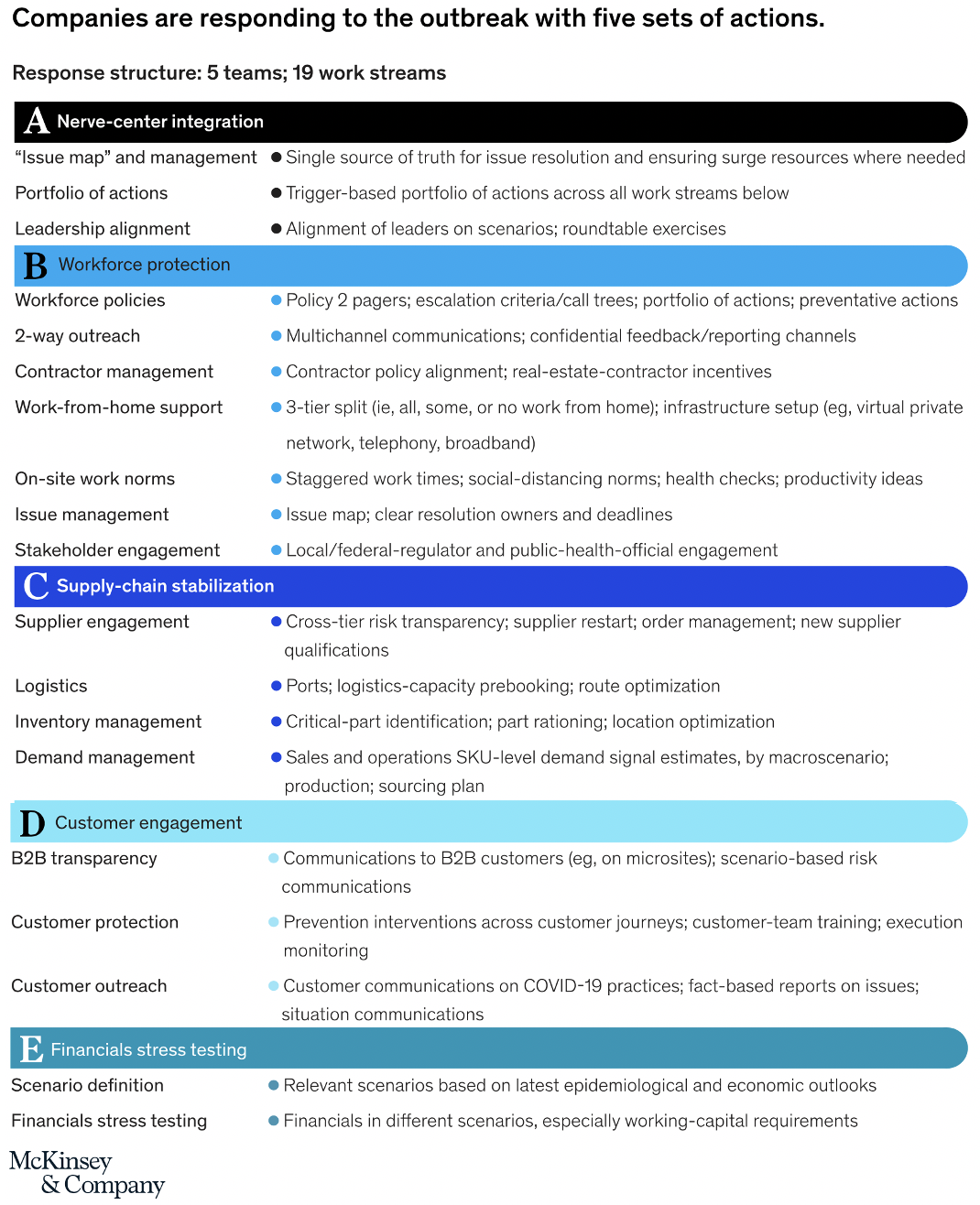 While this list is fairly comprehensive, some companies are taking other steps. However, we have seen evidence that many companies are finding it hard to get the major actions right. We have consistently heard about five challenges.

Exponential case-count growth is hard to internalize unless you have experienced it before. Managers who haven’t experienced this or been through a “tabletop” simulation are finding it difficult to respond correctly. In particular, escalation mechanisms may be understood in theory, but companies are finding them hard to execute in reality, as the facts on the ground don’t always conform to what it says in the manual. Crisis case studies are replete with examples of managers who chose not to escalate, creating worse issues for their institutions.

Employee safety is paramount, but mechanisms are ineffective

Policy making at many companies is scattershot, especially at those that haven’t yet seen the coronavirus directly. Many, such as professional-services and tech companies, lean very conservative: their protection mechanisms often add to a perception of safety without actually keeping people safer. For instance, temperature checks may not be the most effective form of screening, given that the virus may transmit asymptomatically. Asking employees to stay at home if they are unwell may do more to reduce transmissibility. Such policies are more effective if employees receive compensation protection—and insulation from other consequences too.

Some companies aren’t thinking through the second-order effects of their policies. For example, a ban on travel without a concomitant work-from-home policy can make the office very crowded, leading to higher risk of transmission. Others are adopting company-wide policies without thinking through the needs of each location and each employee segment.

Optimism about the return of demand is dangerous

Being optimistic about demand recovery is a real problem, especially for companies with working-capital or liquidity shortages and those veering toward bankruptcy. Troubled organizations are more likely to believe in a faster recovery—or a shallower downturn. Facing up to the possibility of a deeper, more protracted downturn is essential, since the options available now, before a recession sets in, may be more palatable than those available later. For example, divestments to provide needed cash can be completed at a higher price today than in a few weeks or months.

Assumptions across the enterprise are misaligned

Some companies are pursuing their coronavirus responses strictly within organizational silos (for example, the procurement team is driving supply-chain efforts, sales and marketing teams are working on customer communications, and so on). But these teams have different assumptions and tend to get highly tactical, going deep in their own particular patch of weeds rather than thinking about what other parts of the company are doing—or about what might come next.

The near term is essential, but don’t lose focus on the longer term (which might be worse)

Immediate and effective response is, of course, vital. We think that companies are by and large pursuing the right set of responses, as shown in Exhibit 4. But on many of these work streams, the longer-term dimensions are even more critical. Recession may set in. The disruption of the current outbreak is shifting industry structures. Credit markets may seize up, in spite of stimulus. Supply-chain resilience will be at a premium. It may sound impossible for management teams that are already working 18-hour days, but too few are dedicating the needed time and effort to responses focused on the longer term.